WE need financial assistance to once again fight our council from extending into our harbour!

A 90 metre EXTENSION OF QUEENS WHARF by 2 concrete ‘dolphins’ to berth over-size Cruise Ships: Resource Consent, being sought by Panuku/ Auckland Council, is about to go before the Planning Hearing Commissioners on February 18th.

The proposal is to put two concrete mooring pads off the end of Queens Wharf extending out into the harbour for a length of 90.5 metres, with a 35 year lease. That’s permanent.

The buoys are to enable the berthage of ‘over-size’ cruise ships, such as the Ovation of the Seas, which is scheduled to come to Auckland for 7 days this summer season. The ships arrive in the morning and leave at the end of the day. As they do in Sydney, the ship moors in the harbour using stationary positioning technology, and the 4,000 passengers on board are shuttled back and forth in tenders. Given the size of the vessels in relation to the locations they visit, this is not unusual. Nowhere in the Southern Hemisphere are they berthed right in the centre of a destination’s downtown.

Under pressure from the cruise industry, Auckland Council is bending over backwards to accommodate these ‘over-size’, 348-362 metre long ships, carrying up to 4-6,000 passengers, right on Queens Wharf, with an industrial scale extension that will severely compromise the future development of Queens Wharf as the marae atea of our city.

We are not against cruise ships. They have always been a welcome addition to our harbour and city life. Traditionally bigger ships, such as the 345m Queen Mary 2, have been berthed (enthusiastically) by Ports of Auckland at Jellicoe Wharf. But cruise ships will continue to increase in size and number and Auckland Council has, to date, NO long-term plan or funding in place for the Waterfront or its development. This total lack of management of our Waitematā Waterfront beggars belief.

In 2008, Queens Wharf was bought from the Ports of Auckland by the Crown and local government to become the People’s Wharf, an important civic space where the city meets the sea. The importance of Queens Wharf historically in the formation of Auckland as a city, inevitably continues into the future. At the northern end of Queens Wharf where it reaches into the sea, there is a natural expectation of openness and engagement with the Waitematā Harbour. This will be unacceptably compromised by the proposed concrete pads and gangways.

We dispute Auckland Council’s claims that the Cruise ships will go elsewhere and that valuable jobs will be lost. The great majority of cruise ships being smaller come here quite happily. We want growth to be appropriately planned.

Berthage of ships of this magnitude should be the responsibility of Ports of Auckland. POAL argue that they have no room for 5-10 ship visits for 12 hours at a time. Meanwhile, they are looking at closing Bledisloe Wharf for three weeks for a car rally!!! There are other options available for them to manage their schedule and Auckland Council, as 100% shareholder, should be making that very clear to them.

We are calling for this ad-hoc short-sighted proposal to be turned down.

Instead, a vision and planning process should be underway NOW.

We would like to see the Mayor show leadership on this critical issue and begin a proper inclusive shareholder consultation process, using the same model undertaken with the Ports Future Study.

Urban Auckland is fronting a submission to the Resource Consent hearing, on behalf of other community groups (City Centre, Parnell and Devonport residents, the Civic Trust, Auckland Architectural Association and Stop Stealing Our Harbour) in a legal process that is likely to cost us $60-70,000.

Our High Court legal battle to stop the port expansion in 2015 cost  $250,000. Fortunately, the 220m development of Halsey Wharf for the America’s Cup bases was resolved in our favour before it became expensive. We can’t believe the people of Auckland are still having to fight these battles of expansion into the Waitematā, without a vision for the future of our Waterfront.

We urgently ask for your financial support. 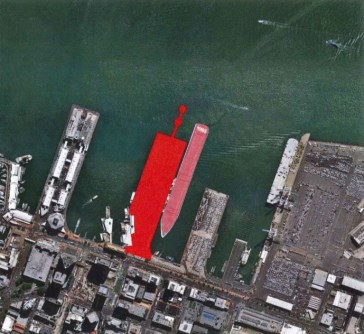